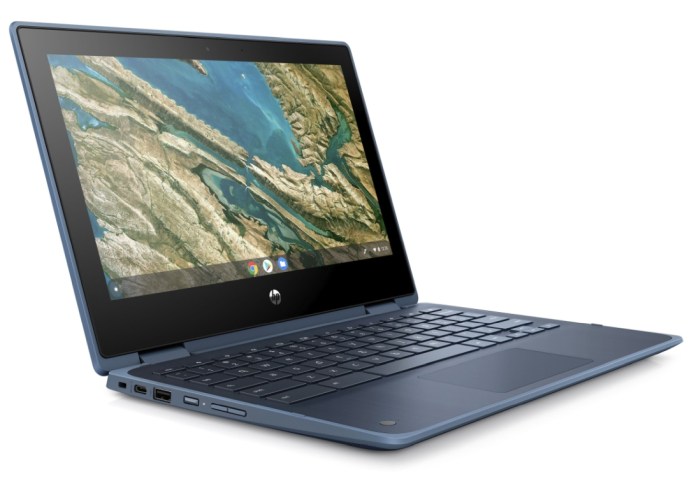 This convertible notebook features an 11.6 inch, 1366 x 768 pixel touchscreen display and a 360-degree hinge that allows you to use the computer in notebook, tablet, tent, or stand modes.  The laptop should be available this this month and comes with up to an Intel Celeron N4120 processor, up to 8GB of LPDDR4-2400 RAM, and up to 64GB of eMMC 5.0 support. There’s optional support for an active digitizer that lets you use a Wacom EMR pen with the tablet.

This model is a little thinner and lighter, at 11.6″ x 8.1″ x 0.74″ and 2.9 pounds, but it lacks the 360-degree hinge or active pen support. The touchscreen display is also optional — there are also non-touch models.  Otherwise, the specs are largely the same.

While HP is positioning this laptop as an option for teachers and students, the lack of the EE at the end of the name makes it clear that this isn’t an education-exclusive device. It’s just HP’s latest 14 inch Chromebook.  Available this month up to an Intel Celeron N4120 processor, up to 8GB of RAM and 128GB of storage, HP says its new 14 inch Chromebook will ship with a choice of HD or full HD displays.